While jogging home, I noticed this trifecta of my favorite things to photograph — the Golden Gate Bridge, a sunset, and a reflection — in a rustic window near Crissy Field’s Warming Hut.

Photography tip: Go outside right after it rains 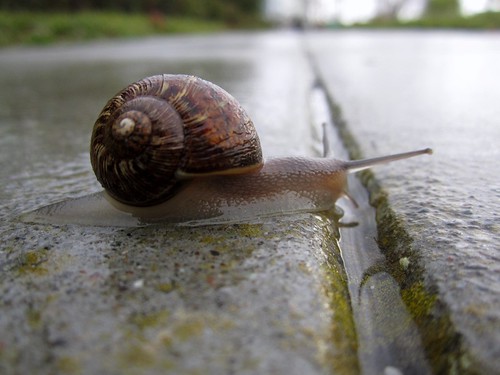 A snail trying not to get stepped on in Sunnyvale, a photo by nicolecwong on Flickr.

Many of my favorite photos take advantage of images that surface after storms. I love snapping pictures of watery reflections — like upside-down skyscrapers in still puddles or bridges that look wobbly in rippling water — to show the world from a different perspective.

I’ll even squat on the wet pavement to capture tiny reflections — like this snail’s tentacle. It’s funny seeing the world from the perspective of the snail, as we both try to go about our business yet not to get stepped on by workers dashing down the sidewalk to catch their shuttle bus home.

Surprise at dusk: Someone surfs, undaunted by darkness

Hooray for later sunsets and less traffic! I arrived home yesterday in time to squeeze in a 5-mile walk to and from my favorite thinking spot. It’s my very own inspiration point, actually — where the previous blog post dawned on me.

Usually I hurry home from my stroll before the streetlamps flicker on. But yesterday I lingered. Because as the Golden Gate Bridge began to glow with headlights and the tide continued crashing harder and higher against the humongous rock in front of me, I spotted — way out there in the distance — a few surfers riding the waves.

Simply captivating. And something I wanted to capture with my fuzzy smartphone camera. Because those people decided to surf, undaunted by darkness.