When life’s waves crash down, do you sink, swim, or surf?

At some point in each person’s life, the waves come crashing down. It’s easy to get deluged. To feel like you’re going to drown.

You can sink. Or swim. Or surf.

Surf? Yes. If you have the right attitude, you can develop the skills to ride out even the roughest waves.

I’ve been thinking about this over the past week since I had the privilege of interviewing Rod Warner, head of the Building Resilience consulting firm in Cape Town, South Africa. He chose to cultivate his personal resilience — to cope with his wife suddenly stricken with a debilitating illness and his successful national sales career unexpectedly vanishing amid layoffs. He not only learned to survive, but he also figured out how to thrive.

As I embarked on my usual weekend walk along the San Francisco Bay to admire nature — and coincidentally put into practice one of Warner’s seven building blocks for strengthening personal resilience — the waves mesmerized me. I watched the waves’ story unfold.

What your tweets say about you (or: How to explain Twitter to your grandma)

What do my 3,545 Twitter status updates, photo uploads, location check-ins, article shares, and retweets reveal about who I am?

Last night, I tried to explain Twitter to my 91-year-old grandma. Why? Well, she asked how I won our all-expenses-paid dinner for two at The Clift Hotel — a Social Media Week random act of kindness from Nokia Connect. My grandma is tech-savvy enough to use a computer to play Bejeweled, but she’s abandoned her email account. And she’s heard of Facebook and LinkedIn because their IPOs generate so many headlines, but she wasn’t quite sure what they were or what “social media” was.

So I ditched industry jargon and dreamt up analogies, two useful techniques that I had employed as a technology reporter writing for a wide array of non-techie readers across the United States. I also showed her the conversation of tweets that resulted in the five-course, wine-paired meal that she called “a once-in-a-lifetime experience.”

But to truly help her understand my brand personality, presence, and interaction on Twitter, it would have been helpful to show her this data visualization:

END_OF_DOCUMENT_TOKEN_TO_BE_REPLACED

Best view of the Golden Gate Bridge at sunset 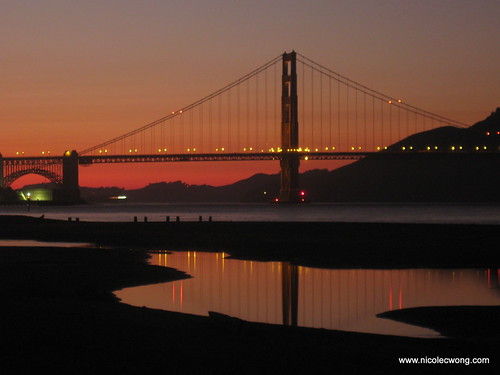 You can catch glorious glimpses of the Golden Gate Bridge from any side of it — north or south, east or wast, even above or beneath. I unfailingly favor admiring it from the east, as I jog along the San Francisco marina toward the bridge and the sun setting behind it.

Today at dusk, the headlights and tail-lights that flipped on for Friday rush hour illuminated the bridge’s suspender-like ropes that reflected in a puddle on the beach. I love how the commute traffic added a magical glow!